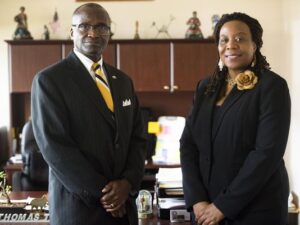 It had been nearly two weeks since the unexpected death of the center’s longtime director, Lorenza Patrick. But Price doesn’t feel like he’s entirely gone, not while she keeps remembering and repeating his advice every day.

“It’s like Mr. Patrick is in the room,” Price laughed.

The center organizes training programs, helps businesses secure loans and works one-on-one with startups to get them on the right track. Patrick led those efforts for 20 years, counseling more than 2,600 people and helping to create hundreds of businesses.

That was long enough to learn some of Patrick’s most important lessons.

“First and foremost is the total dedication to helping small businesses turn ideas into concepts, something they can measure,” Taylor said.

What’s the biggest barrier to that?

Vladimir Averett of Heritage Barber Shop was one of several local business owners who said Patrick wrote their business plans for them in the early days, then kept them on course. “I can’t even think about where we’d be without his help and the SBDC,” Averett said after Patrick’s death.

Price said that as a former business owner she arrived at the SBDC thinking she knew “everything about it” until she saw Patrick’s dedication to planning and the difference it can make.

“He said, ‘If you don’t understand the financials of the business plan, you won’t ever understand the health of your business,’” Price said. “He pounded on that. I believe it.”

No successor to Patrick has been named. The center’s leaders said that decision will come later.

But in the meantime, they’re continuing the one-on-one counseling and other programs, just as they have for decades.

Price said the process still starts with the financials, talking over how the money will work. The goal is for the entrepreneur to be able to write a business plan, or at least a draft, by the end of the counseling.

She said she misses being able to turn around and ask a quick question to Patrick, and take advantage of his wealth of knowledge and experience. But Price and Taylor both said the center’s function and goals have not changed.

“Mr. Patrick set the stage, but it’s our job to continue the mission,” Taylor said. “We know what needs to be done, and we’ll continue to march.”